Tensegrity and the body

Tensegrity is an elision of 'tension + integrity'. Buckminster Fuller, building on the highly original sculptures of Kenneth Snelson, coined the term, to indicate that the integrity of the structure derived from the balance of tension members, not the compression struts.

Tensegrity, tensional integrity or floating compression is a structural principle based on a system of isolated components under compression inside a network of continuous tension, and arranged in such a way that the compressed members (usually bars or struts) do not touch each other while the prestressed tensioned members (usually cables or tendons) delineate the system spatially.

The term was coined by Buckminster Fuller in the 1960s as a portmanteau of "tensional integrity". The other denomination of tensegrity, floating compression, was used mainly by the constructivist artist Kenneth Snelson.

Tensegrity is a structural principle based on a system of isolated components under compression inside a network of continuous tension, and arranged in such a way that the compressed members (usually bars or struts) do not touch each other while the prestressed tensioned members (usually cables or tendons) delineate the system spatially.

​Biotensegrity, a term coined by Dr. Stephen Levin, is the application of tensegrity principles to biological structures. Biological structures such as muscles, bones, fascia, ligaments and tendons, or rigid and elastic cell membranes, are made strong by the unison of tensioned and compressed parts.

​
Biotensegrity makes a subsequent step, that is, it not only allows the cell or the structure to survive and adapt, but allows it to move, explore, in schemes based on the concept of tensegrity. Three other key points are highlighted: mobility, stability, and function.

What is Tensegrity in architecture?​​

In other words, tensegrity is the property demonstrated by a system that employs cables (traction) and rigidity of other elements (usually steel, wood or bamboo) capable of acting under the intrinsic stresses (traction and compression) together and simultaneously, giving greater resistance and formal stability.​ 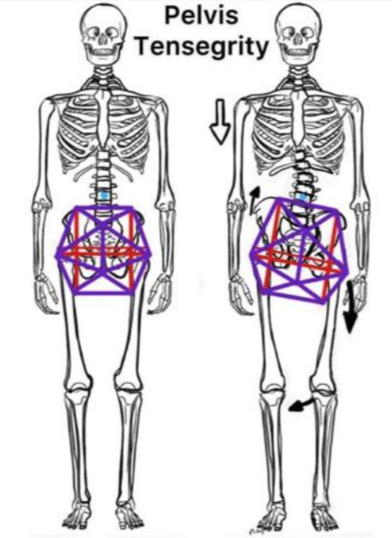 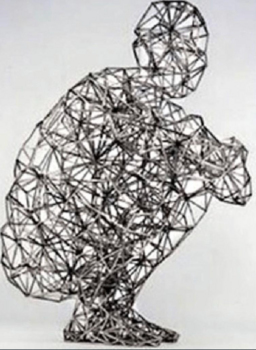 Stability is the resistance to a change in the body's acceleration, or the resistance to a disturbance of the body's equilibrium. Balance within muscle groups and alignment of the skeletal system affect body equilibrium and balance. Stability of the body is achieved by combining alignment of the skeleton, activation of muscles at the appropriate time, and sequence to perform any desired movement. The body has a center of stability (referred to the center of gravity) located slightly in front of your L2-L3 level. When the center of the gravity is maintained within the body's base of support, then the body is in equilibrium.

The core is the center of our body and it functions to stabilize the trunk, while the arms and legs move during functional movements.

How do the Three Points of Stability

(AKA. The Triangle of Stability) work?

For example, in a fork lift, the three points are the two front wheels and the pivot point of the rear axle. Connect these three points (creating a triangle) and you have what's called the 'Triangle of Stability'. One major difference between a forklift and a car is stability. Almost all counterbalanced powered industrial trucks have a three-point suspension system.​

The body suspension system works in the same way to create forces and tension that counterbalance, generate power, and promote healthy movement. 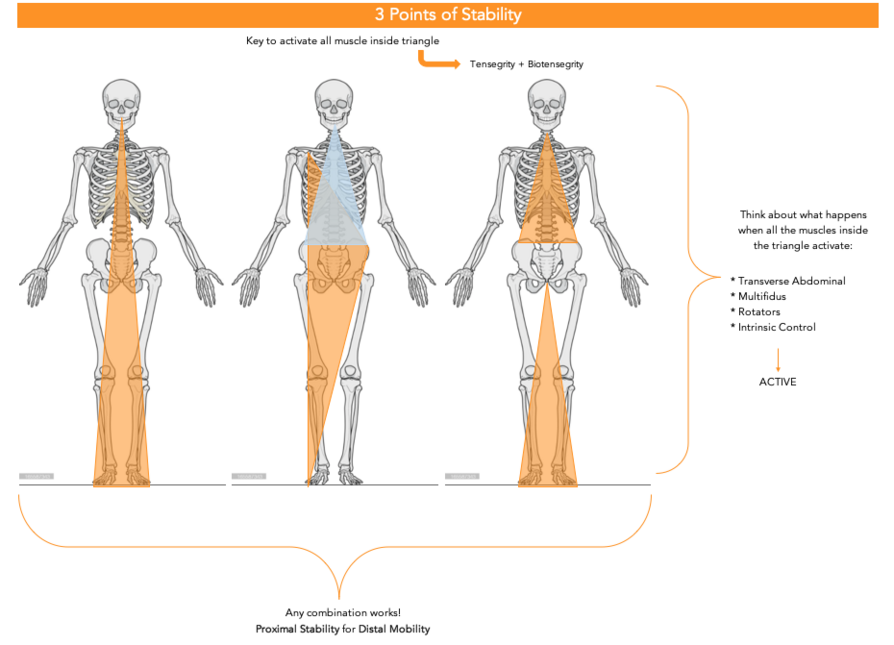